This chess set is made of white and black marble.  The black marble design is royal black.  This stone had a dark, natural color with lights quartz and calcite coursing through.  The white marble is bianco venato.  This white stone has light grey patterning crisscrossing its surface.  These colors create a pure, authentic look, much like the original chess sets of the Staunton style from London.  The white marble continues into the border.  The pieces have a sophisticated, yet elegant design.  The board is 16” wide and the king stands 3.5” tall.  The set comes with a blue velvet case to individual hold each piece.

So well done and so well presented, I love the cases too. So worth the money. Thank you.
Im very happy with it. 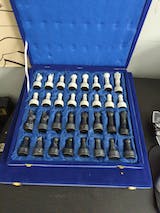 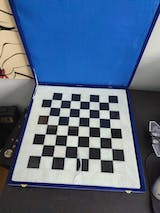 I got this set for my boyfriend for his graduation this year and he is completely obsessed. I didn’t quite realize how many hours I was committing to log on this thing but it has been totally worth it to have something so beautiful and functional to get to play together. The pieces are each unique and the board is heavy. I love the white edge.

It was absolutely beautiful. The pieces were beautifully made and I loved the board. Everything came in velvet bound cases So happy with this purchase.